This is my first shortwave reception of a clandestine radio station. Called the Sound of Hope (SOH), or Xi Wang Zhi Sheng, below is a video capture of them signing off. Too bad their was no identification, but the time and frequency along with the style of music are good enough for me.

Sound of Hope Radio (SOH) is a well established Chinese Language media network providing an alternative to China’s state controlled media with news and cultural programming. Radio Free China (RFC) is Sound of Hope’s project to reach listeners in Mainland China with programming beyond the control of China’s omnipresent blockade of free information.

RFC is seeking to pierce this barrier through large-scale shortwave radio broadcasting directly to a majority of the Mainland Chinese population; providing them with up to date news and diversity of opinion outside of government control. SOH possess the experience, talent and perspective to deliver the information Chinese people need to understand the world. Many Chinese already listen to short wave radio and others could purchase this technology cheaply and easily. With the Olympics approaching and the world paying particular attention to China, delivering free information to the Chinese people now will have the greatest impact.
The Chinese Communist Party (CCP) uses propaganda to control public opinion, oppress its own people and get support to how it handles foreign relationships. The CCP tries to block out sources of information beyond its control because its propaganda wouldn’t work if people had free access to information. RFC needs funds to purchase a sufficient number of broadcast frequencies to overcome China’s jamming. RFC is the cheapest and most convenient way to directly reach the Chinese people. SOH is uniquely qualified to carry out this task. 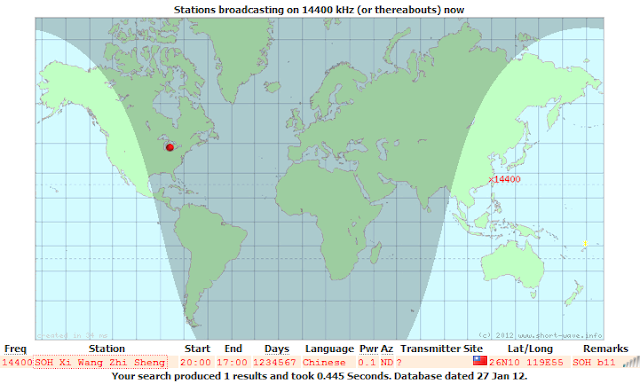 1 thought on “Clandestine Radio Sound of Hope from Taiwan”

Radio-Hobbyist.com
22 Templer Drive,
Ancaster, ON.
Canada
Radio-Hobbyist.com is a participant in the Amazon Services LLC Associates Program, an affiliate advertising program designed to provide a means for website owners to earn advertising fees by advertising and linking to amazon.com, audible.com, and any other website that may be affiliated with Amazon Service LLC Associates Program. As an Amazon Associate we earn from qualifying purchases.