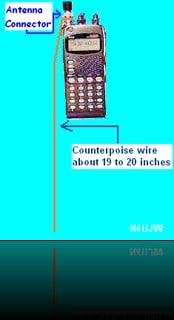 The following modification will help you to make the most of your HT by increasing the factory antenna’s efficiency and the cost is just a piece of wire!

When limited to “barefoot” operation, with a “rubber duck”, HT antennas are not very efficient nor adequate for communications. They fail miserably as an effective radiator due to their design! They are nothing more than an extended dummy load acting as an antenna!

Get ready to use that scrap of wire you have in your junk box!
A simple, inexpensive, and effective method to improve a “rubber duck” antenna is by adding an external counterpoise or “tiger tail” thereby adding the other “half”.

The National Bureau of Standards tests of Public Safety high band and amateur 2-meter antennas indicate that a “rubber duck” has -5db, “negative gain” compared to a quarter wave held at face level. In terms of effective radiated power (ERP), this means that a 5 watt HT with rubber duck, radiates only 1 watt. Operating an HT on your belt results in another -20db attenuation, reducing ERP to 50 milliwatts! That’s 1/20 of one watt!
UHF results are no better…

Due to the design of the factory installed HT antenna, you are effectively missing half of the antenna!

Adding the other missing “half”:

You can easily build one from a quarter-wave piece, (about 19.5″ on 2m, 11.5″ for 220 and 6.5″ for 440), of stranded insulated wire, crimped and soldered to a battery clip or use a small spring tension clip that will fit the BNC antenna connector with the wire attached to it. Use a clip or other connection that fits tightly but can be removed if needed. It must make both a good mechanical and electrical connection.

Another method would be to attach the end of the wire by soldering it to a grounded portion of the circuit board inside the HT, although this may not be practical with some models, or any point that is at ground potential on the HT such as the “ground” side of an external speaker/headphone jack, the BNC connector at the antenna, or the Negative side of the battery terminal. The preferred location is at the factory antenna base at the BNC connector. If you have some other type of metal antenna connector the same applies.
Many of the newer models don’t lend themselves to internal modifications easily. If the “rubber duck” antenna that came with the HT does not come off, then you will have to make the connection inside the HT to a grounded point. Extreme care must be taken to prevent shorting out other components!!!!!! Use insulated wire. You may have to drill a small hole in the case for the exit point of the wire and tie a knot inside to provide strain relief. Each installation will be different. Use your own judgment!
Always reinforce the soldered connection with heat shrink tubing or tape to resist flex and shorting to other components if possible.
When the counterpoise, (the other half of the antenna), is clamped to the outer collar of the BNC connector on your HT antenna, it helps to prevent RF from coupling with your body, so your completed HT antenna “system” acts much like a center-fed dipole instead of an end-fed dummy load!

You just built a directional antenna and did not know it!

In marginal conditions, extending the counterpoise horizontally and pointing your hand to steer the radiation pattern where you need it, produces a dramatically stronger signal than letting it “droop” towards the ground. Experiment with the angle of the counterpoise to get the best results. In effect, you are creating a form of “V” type center-fed vertical dipole with a bit of gain compared to just the factory-installed antenna.

Edited and re-written from an article entitled “Getting the Most from Your Hand-Held Transceiver” by C. Edward Harris, KE4SKY, AEC Fairfax ARES