Just worked K7UGA, special event station for the Centennial celebration of Arizona. Using the call-sign of Barry Goldwater, they station was working many hams on 20 meters. 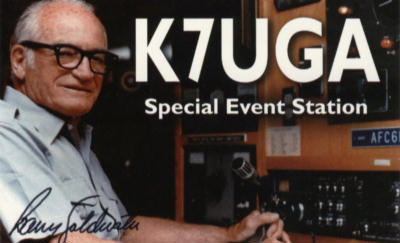 Barry was way before my time of understanding politics, especially US politics, but I do know he was a Republican that was concerned about the influence of the religious right. For that, I think he was on the right track. Religion has no place in politics. Period.

“Mark my word, if and when these preachers get control of the [Republican] party, and they’re sure trying to do so, it’s going to be a terrible damn problem. Frankly, these people frighten me. Politics and governing demand compromise. But these Christians believe they are acting in the name of God, so they can’t and won’t compromise. I know, I’ve tried to deal with them.”

The Central Arizona DX Association is very pleased to announce the Special Event Operation of K7UGA for the celebration of Arizona’s Centennial during the week of February 13th, 2012. Arizona’s 100th birthday is celebrated on February 14, 2012. Several public announcements will be made through the normal Amateur Radio publications. Special Event operations will take place during the entire week of February 13 – 19, 2012.

Barry M. Goldwater was born in Phoenix, Arizona Territory, on New Years Day 1909. (Arizona became the 48th State on February 14, 1912). Barry was a Major General in the USAF Reserve, and retired in 1967 after 37 years of both active and inactive duty. He was very active in Air Force MARS, and during the Vietnam conflict his Phoenix station was used to provide many thousands of phone patches from service personnel in Southeastern Asia to loved ones back home in the States.

During his time in Congress, SenatorGoldwater supported the right to vote for people 18 years or older, repealed the Military Selective Service Act, and was responsible for the “Goldwater Amateur Radio” legislation that established the VEC program, the Amateur Auxiliary, and exempted Ham Radio from the secrecy provisions in the Communications Act of 1934. This important legislation also permitted the FCC to set RFI susceptibility standards for home electronic equipment. Barry was the President of QCWA in 1972-1973. He was a Life Member of ARRL, and Life Member of the Central Arizona DX Association. While living in Washington D.C., Barry maintained the call sign K3UIG. In 1964 Barry was the Republican nominee for President of the United States. Barry Goldwater died on May 29, 1998.
On February 14, 2004, the Town of Paradise Valley, Arizona, paid homage to its native son, Senator Barry Goldwater, by dedicating a 1-1/2 Acre memorial park in his honor. The site contains historic references, including 8 bronze medallions showing various aspects of K7UGA’s life. When in the Phoenix area, please visit the site.

Radio-Hobbyist.com
22 Templer Drive,
Ancaster, ON.
Canada
Radio-Hobbyist.com is a participant in the Amazon Services LLC Associates Program, an affiliate advertising program designed to provide a means for website owners to earn advertising fees by advertising and linking to amazon.com, audible.com, and any other website that may be affiliated with Amazon Service LLC Associates Program. As an Amazon Associate we earn from qualifying purchases.